The largest portion of my law practice is the defense of people charged with Driving While Intoxicated cases. When a client first reaches out to me about their arrest, many are calling to tell me that they were arrested and for "DUI," a charge that does not exist in the State of New York.

Throughout the United States, laws prohibiting the operation of a motor vehicle while intoxicated by alcohol have many different names, including DUI (Driving Under the Influence), OWI (Operating while Intoxicated) and of course, DWI (Driving While Intoxicated.)

Regardless of what the client calls the charge, each offense offers a unique set of consequences. With the exception of a first time Driving While Ability Impaired by Alcohol charge (DWAI), which is a traffic infraction, anyone accused of committing any of these charges will be charged with a crime (unclassified misdemeanor for a first offense and a felony if that person is charged within ten (10) years of a prior misdemeanor conviction for similar conduct.)

Recent legislation has also made it a felony, even for a first offense, for anyone operating a motor vehicle while intoxicated or under the influence of drugs with a child fifteen years old or younger as a passenger.

While both the criminal and administrative sanctions may differ based upon the specific charge, each one is a serious matter placing both an individual's driving record and criminal record at risk. The sentencing options available to a Court include, but are not limited to, fines, loss of license, probation, incarceration and in some circumstances, the mandate that an ignition interlock device be installed in any vehicle owned and/or operated by the offender.

Please contact me at my Rockland County, New York office if you or someone you care about is charged with any of these offenses. During our initial telephone conversation, we will be able to sort out the charges, schedule a free consultation and discuss how I can protect your rights and your future.

Brian Berkowitz, is a former prosecutor and a DWI, Criminal Defense and Traffic Ticket Attorney representing clients in Rockland County and the State of New York. 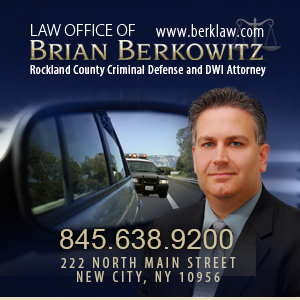